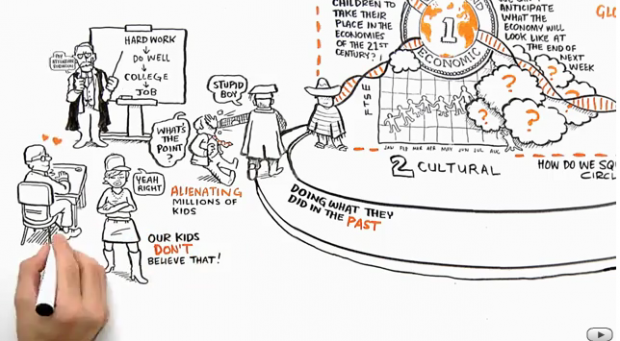 Why haven’t education reform efforts amounted to much? Because they start with the wrong problem, says John Abbott, director of the 21st Century Learning Initiative.

Because disaffection with the education system reflects a much deeper societal malaise, it’s imperative that we first figure out what kind of world we really want: a world populated by responsible adults who thrive on interdependence and community, or a world of “customers” who feel dependent on products, services, and authority figures, and don’t take full responsibility for their actions? The answer, he says, will point to the changes needed in all three pillars of education — schools, families, and communities.

This is one of Abbott’s primary takeaways from a career spanning more than two decades of teaching in England, followed by three decades at the helm of an international nonprofit (begun in the U.S. but now headquartered in England), whose mission is to promote fresh thinking based on the existing body of research about how children learn. Its findings have been synthesized into policy briefings, reports, and a book, “Overschooled but Undereducated: How the crisis in education is jeopardizing our adolescents.” It has also just published a distillation of its work, called “Battling for the Soul of Education.”

As Abbott sees it, the need for reflection has never been greater. Spurred by technological advances, “civilization is on the cusp of a metamorphosis,” he says, that will lead either to societal collapse and chaos, or to a resurgence of liberty, community, and ethics. Either way, schools are stuck in the past: The emphasis has been on feeding children static information and rewarding them for doing only what they’re told, instead of helping them develop the transferable, higher-order skills they need to become life-long learners and thrive in an uncertain future.

Overhauling the educational paradigm means replacing the metaphor — the concept of the world and its inhabitants as machine-like entities — that has shaped the education system, as well as many other aspects of our culture.

This approach — a product of the Industrial Age, which relied on compliant factory workers and mass consumption — promotes weakness rather than strength. It has become even more regimented (and thus more disempowering) in recent years due to a lack of trust. Adults who feel hard-pressed to predict or control their own destinies, and who feel confused about the “big issues of life,” Abbott notes, are less willing to give children the time and space they need to shape their own futures.

Unfortunately, he adds, this approach to education goes against the grain of how young people learn. Research has confirmed what most parents of young children can already see for themselves — that children are born to learn, rather than to be taught, as Abbott puts it. Driven by an inborn desire to make sense of the world and find purpose in life, they naturally observe, deconstruct, piece together and create their own knowledge. They learn best when this intrinsic motivation is harnessed in what he calls “highly challenging but low-threat environments.”

The bottom line, Abbott notes, is that the current system excels at preparing children to be dependent “customers,” so if we hope to instead create a world of responsible, community-minded adults, we need to overhaul the educational paradigm. That means replacing the metaphor — the concept of the world and its inhabitants as machine-like entities — that has shaped the education system, as well as many other aspects of our culture. Because humans are not machines, a reliance on this metaphor has created a large disconnect between people’s actual lives and their inherited expectations and predispositions, which lies at the root of many inter-related modern challenges, says Abbott.

His recommendation: Start by re-examining our collective values and envision a society where individuals once again matter. Clues to a more suitable paradigm can be found in the metaphors that characterize the dynamic, networked Information Age. These share some key characteristics with the pre-industrial past, when people learned in the community, from a variety of adults with whom they built relationships. Learning continued over the course of a lifetime filled with meaningful work (in contrast to today’s high unemployment rates and low workplace engagement levels), and success was judged by whether a person carried out his or her fair share of responsibilities within the community.

All of these elements have a direct bearing on education. “Such a vision is as essential to motivate whole generations of young people to delight in the development of their intellectual powers, as it is to create an adult society that is able — and willing — to devote quite enormous amounts of its energy to the slow, fascinating, if sometimes frustrating but totally essential, task of inducting all its young people into adulthood,” Abbott has written on the Initiative’s web site.

“Children learn most from what they see going on around them,” he explains. “We become who we are based on things around us that we admire or not. Children don’t just turn their brains on when they go to school.”

Therefore a young child is dealt “a shattering blow to its sense of order and purpose when a parent it loves and admires is made redundant …. Too much of that, and the web of life is shattered, and life becomes a crap game where the lasting lesson is take all you can, and put nothing back.”

“It is essential to view learning as a total community responsibility,” he says, and to expect no short cuts. Children need to be integrated, fully contributing members of the broader community, so they can feel useful and valued. (It is not just the children who need this, he adds; healthy communities also need children.)

On a practical level, the most powerful lever for change, Abbott says, is people coming together to “rethink the role of community in the learning process,” agreeing how to divide up responsibilities among professional teachers and other community members, and then launching small pilot projects that are true to their new vision. These efforts will build on each other, he says, and large-scale change will follow.

He cautions against simply copying a specific model that worked elsewhere — each community must figure out what’s best, given its unique circumstances. But he is convinced of one thing: The formal school system needs to be “turned upside down and inside out.” It should be based on the biological system of weaning — i.e., gradually reducing children’s dependence on teachers. Teacher-student ratios should be high in the early years, then decrease dramatically in adolescence, when “the whole community has to become a place of learning,” with mentorships, apprenticeships and other hands-on learning experiences complementing highly self-directed classroom learning.

In general, schools should move away from “an overemphasis on teaching,” Abbott says, and instead view teachers as imaginative, knowledgeable guides. “Any kid can read a textbook — they don’t need a teacher standing over them telling them to do so,” he points out. “They need teachers to inspire them to think about things in a much bigger way than they’ve done before.”

He cites an example from his time as a substitute teacher, when he found himself assigned to teach history to a class of 15-year-olds one afternoon. Casting about for inspiration, he expressed an interest in a student’s book about prisoners of war. When the boy asked him why wars get started, Abbott used the question as a launching pad for a discussion on the topic. He urged the students to consider not only what they’d been taught in school, but also what they’d gleaned from relatives. “It went so well,” he recalls, “that no one heard the bell ring.”

Twenty years later, while waiting for a train during the time of the Falklands War, he was approached by a porter who said he recognized him as the teacher of that class. It had opened his eyes, the man added, to how wars can serve politicians’ careers, and he had referenced it in a discussion with friends the previous evening. “At the end of my history lesson, something had stuck,” Abbott notes, “so that 20 years later, he remembered how between us we had constructed an explanation for the Second World War.”

Simply following a lesson plan wouldn’t have had the same result. “I don’t think teachers should be over prepared for any particular lesson,” he says, “because if they are, they lack flexibility to adapt to where the children are in their understanding.”

Lastly, in this vision of the world, our expectations of children would also be recalibrated. Rather than being considered the age at which people start to become independent learners, 18 (and even younger in some cases) should be viewed as the age when young people “demonstrate that they have already perfected that art, and know how to exercise this responsibly,” says Abbott.

To Advance Education, We Must First Reimagine Society | MindShift.